BANNED in Australia, New Zealand & Korea. BANNED from performing any material off their first three albums in Germany, where the sale of "Butchered At Birth" is outlawed completely!

It has been 16 years since a small band out of Buffalo, New York released their gorified Metal Blade Records debut "Eaten Back to Life," and in their decade+ existence, Cannibal Corpse have accomplished much more than getting their music and concerts banned. Cannibal Corpse have been repeatedly targeted by the morality police (Gore, PMRC, Lieberman, Dole), appeared in a blockbuster Hollywood feature film (Ace Venture: Pet Detective), debuted as the only Death Metal band to rank on the Billboard Top 200 Album chart, graced the covers of virtually every Metal magazine in the world, toured the globe routinely and sold millions of records. All of this with zero commercial radio airplay and no exposure from MTV, save the periodic obligatory controversial news segment. On February 26th, 2002, "Gore Obsessed," the band's eighth full-length studio album, will redefine the Death Metal genre and reign as Cannibal Corpse's most accomplished and scrutinized recording to date. While not infringing on their trademark sound, Cannibal Corpse and multi-platinum first time Corpse producer Neil Kernon (Queensryche, Nevermore, Skrew, Macabre and many more) focused on technically powerful guitars and unmatched bass & drum syncopation that will leave the current crop of corporate makeup metallers slack jawed. "Pit Of Zombies" rips with alternating tempos and time changes that never leaves the listener behind, but drags them screaming into the pit. "Mutilation Of The Cadaver" is another prime chunk of meat that sees vocalist George "Corpsegrinder" Fisher easily spewing forth his finest vocal fury on record (including an unnerving fourteen second scream).

Eight albums in and Cannibal Corpse have never defied their core fan base, continually strengthening their place as the most enduring, relevant and uncompromising Death Metal band ever. With "Gore Obsessed" introducing future classics "Sanded Faceless", "Hung And Bled", "When Death Replaces Life" and "Dormant Bodies Bursting", Cannibal Corpse have buried any and all possibility of being dethroned as the reigning purveyors of aural gore and sonic splatter. Sure to once again peek the interest of those who feel it their responsibility to protect the moral fiber of America's youth culture, Cannibal Corpse again turned to long time friend and artist Vincent Lock to create a visual representation of "Gore Obsessed" that could match the band's musical depiction. Having set a high standard with album covers for "Butchered at Birth" and "Tomb of the Mutilated," Locke, as expected, delivered the gore, and more. The CD cover for "Gore Obsessed" will be masked for retail outlets as no "censored" cover will be available domestically.

Below is our complete Cannibal Corpse news coverage, including columns and articles pertaining to the band. Some articles listed may be indirectly related, such as side projects of the band members, etc.

Catch them here with support from Dark Funeral, Ingested and Stormruler. 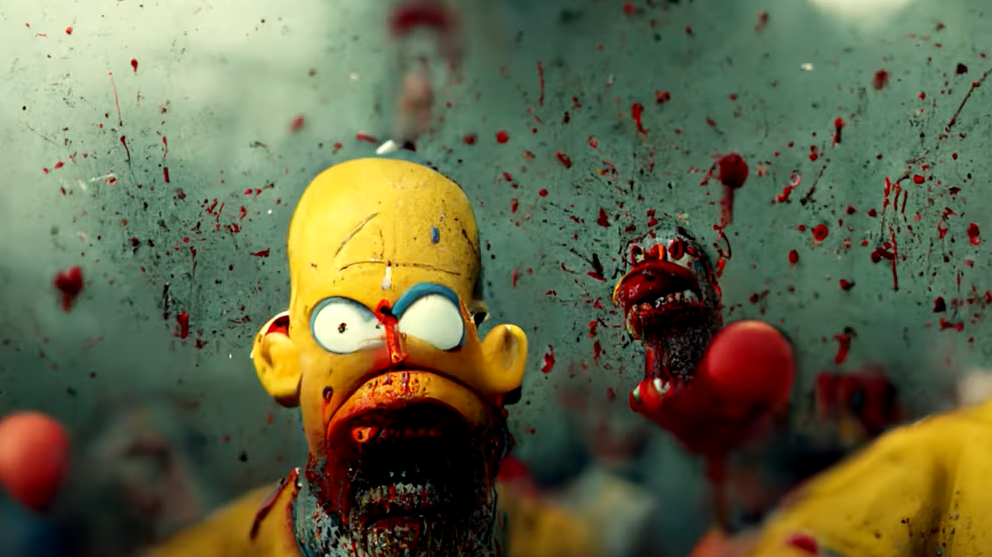 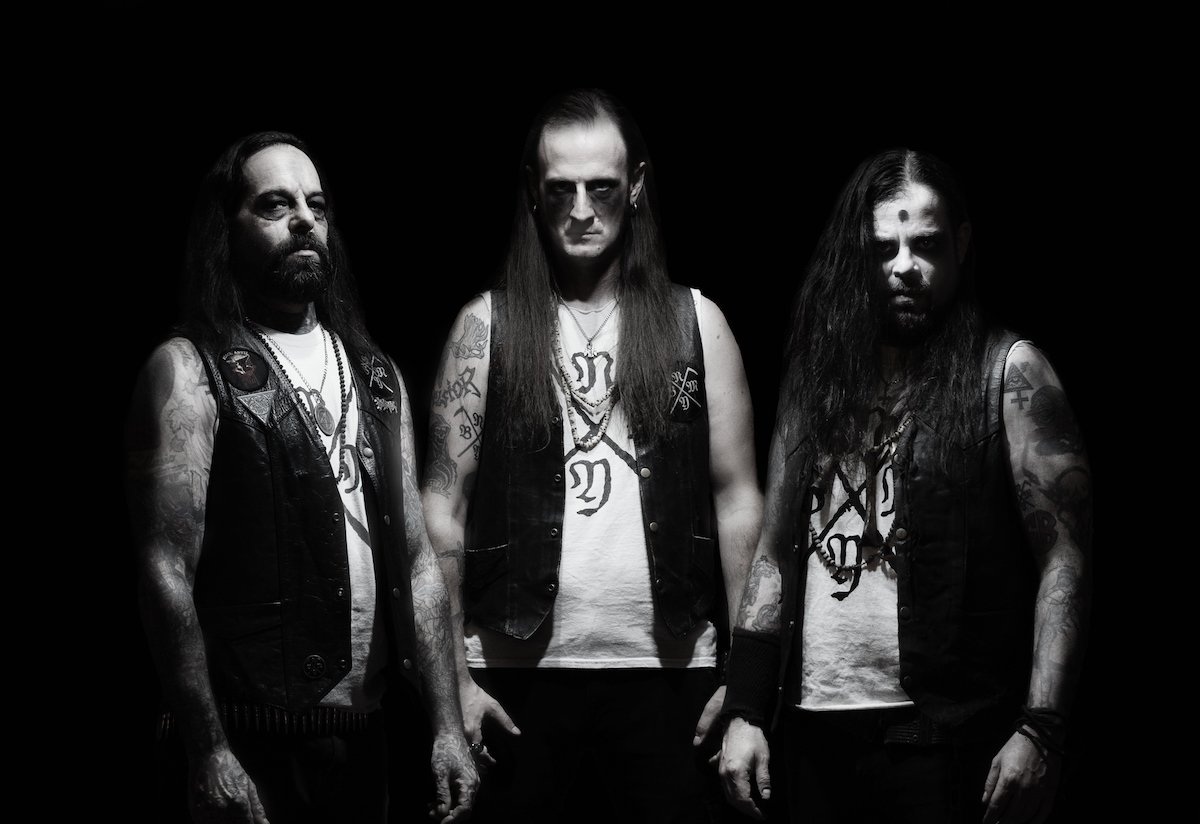 Check out now "29" streaming via YouTube and Spotify for you below.

Black Anvil will be heading out with Cannibal Corpse, Dark Funeral and Immolation for the below November North American Tour: More... 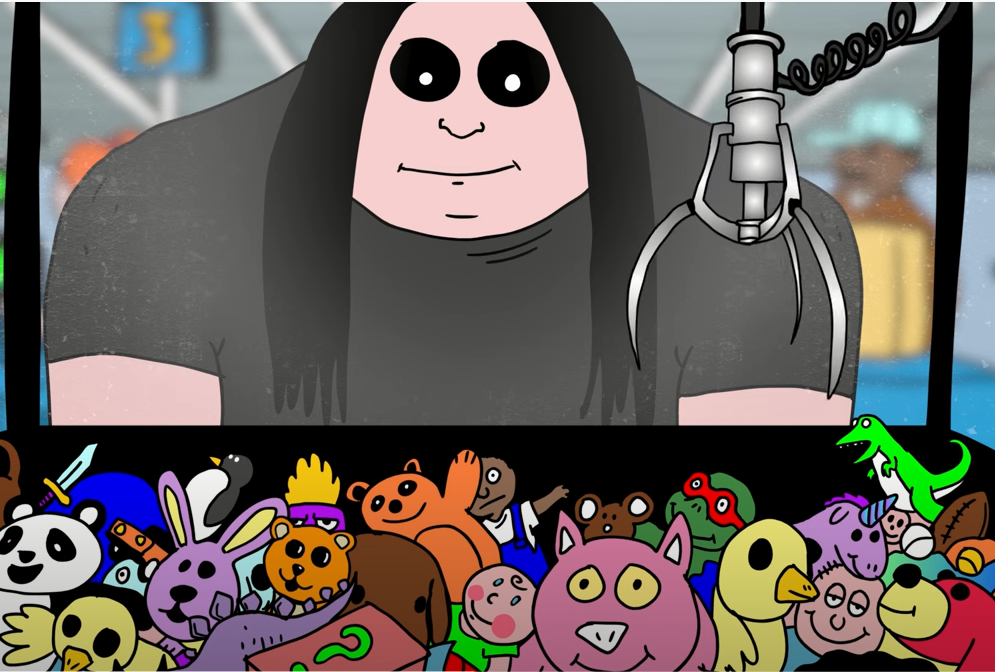 New York City-based black metal outfit Black Anvil premiere their new single and music video named “8 Bit Terror” streaming via YouTube and Spotify for you below. The clip was directed by Sean Pierce. Season Of Mist have scheduled a November 04th release for the trio’s fifth studio album “Regenesis“. 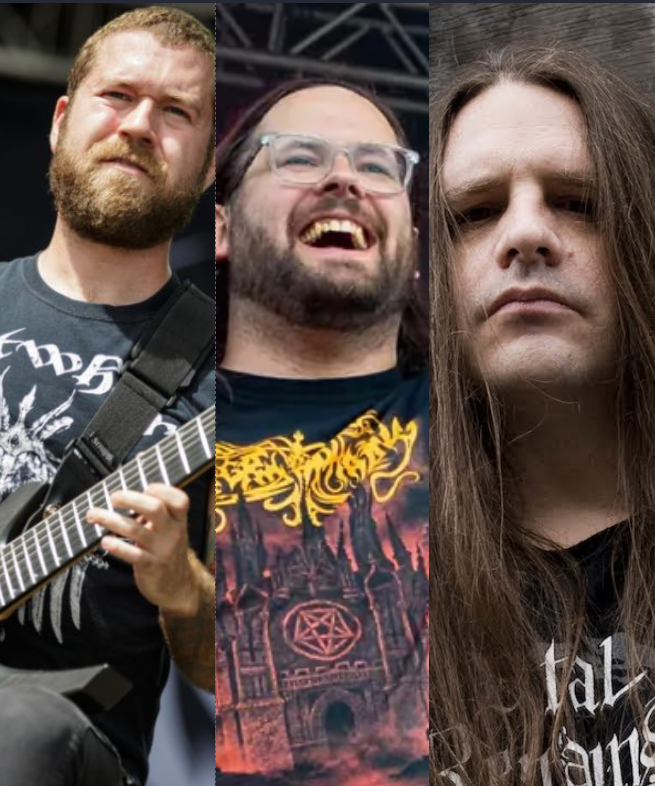 Progressive death metal band Revocation premiere a new single by the name of “Re-Crucified“, which features the late The Black Dahlia Murder frontman Trevor Strnad and Cannibal Corpse vocalsit George “Corpsegrinder” Fisher. That track is streaming now via YouTube and Spotify for you below and is off the band‘s eighth studio full-length “Netherheaven“, due out in stores September 09th, 2022.

Municipal Waste/Iron Reagan frontman Tony Foresta and Cannibal Corpse drummer Paul Mazurkiewicz have joined forces in a new project named Heaven’s Gate. Guitarist Mike Goo of Warthog and bassist Jeff Howe of Reversal Of Man/Horsewhip round up the band’s roster. A first track titled “Jerusalem Syndrome“, has premiered online and can be heard below.

The Tampa, FL-based band will be making their live debut this coming weekend, with the below duo of shows booked. Asshole Parade will join as support. More...

In case you missed it: Billboard - citing a source close to the reunited outfit - have reported that Zakk Wylde (Black Label Society, Ozzy Osbourne) and Charlie Benante (Anthrax) have been confirmed to be the live take over the roles of Pantera’s late guitarist “Dimebag” Darrell Abbott and drummer Vinnie Paul Abbott.

Barnes posted the below animated gif concerning that matter via his Twitter: More...

Technical death metal outfit Revocation will release their eighth studio full-length “Netherheaven” on September 09th through Metal Blade Records. Today the band premiere a new single and music video from it titled “Diabolical Majesty”, streaming via YouTube for you below.

New Orleans groove metal pioneers Exhorder were joined for their performance at this past weekend's Maryland Deathfest by former Cannibal Corpse guitarist Pat O'Brien. You can see fan filmed footage of the performance below. It's currently unknown whether O'Brien has become a permanent replacement for recently departed Exhorder guitarist Marzi Montazeri. More...

Shadow Of Intent premiere a new music video for their track “Blood In The Sands Of Time”. Testament's Chuck Billy guests on that particular song off the band’s latest album “Elegy“. 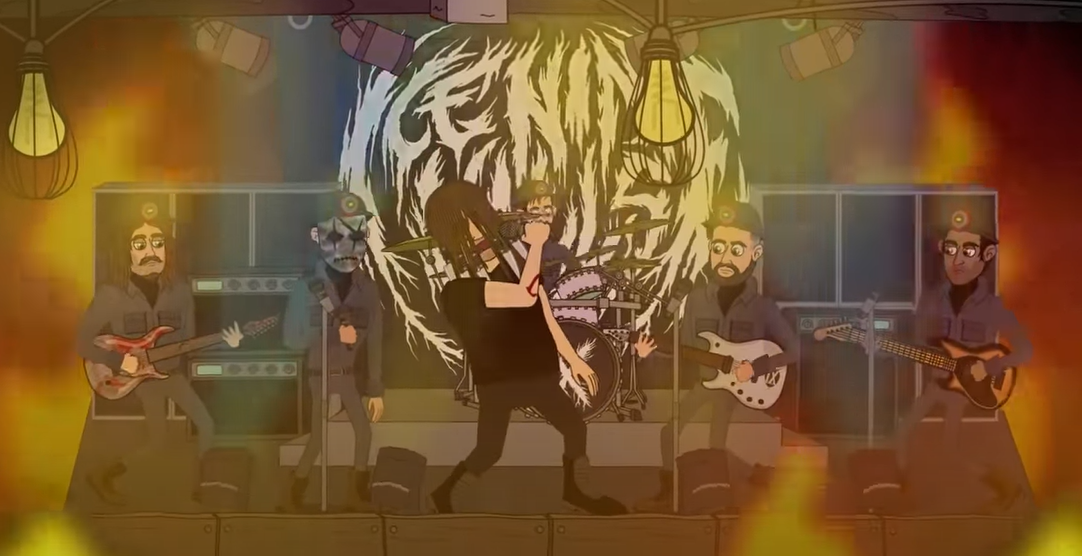 Ice Nine Kills premiere their animated music video for the band's track “Take Your Pick” off their latest effort “The Silver Scream 2: Welcome To Horrorwood“. The song was inspired by the 1981 horror film ‘My Bloody Valentine‘ and finds Cannibal Corpse frontman George “Corpsegrinder” Fisher guesting.

Diamond Oz Presents: The Best Of 2021

Well... This was another eventful year wasn't it!? In yet another twelve months dominated by political issues, a global pandemic, hatred, division and injustice, all the ingredients were there for metal music to have plenty to tuck into. Musically, 2021 was a solid year with some superb offerings from bands all over the world, including some wonderful debuts and returns. However, before we get to the best of the brutal, it's only right that we acknowledge those who have left us since January.

How I Wish You Were Here

Sadly, 2021 has seen some of metal's most beloved leave us. From teenage favourites to cult heroes and those who weren't on stage but still made an impact, metal was left poorer for such losses. Entombed/Entombed A.D. vocalist Lars Goran Petrov, one of Swedish death metal's most recognisable and favourite voices succumbed to bile duct cancer aged only 49 in March, with three more singers following him into the aether in June in the shapes of Skid Row's Johnny Solinger, Sven Gross of Fleshcrawl and John Lawton of Lucifer's Friend/Uriah Heep. Only a month later, former Slipknot drummer Joey Jordison, himself an inspiration for so many of today's young drummers, passed away at the age of 46. The COVID-19 virus also claimed a legend in former Trouble singer Eric Wagner, who died at 62, just before a scheduled tour with his band, The Skull.

As sad as death always is, some felt particularly tragic this year, including the suicide of ex Metal Church singer Mike Howe, who initially spent eight years with the band between the eighties and nineties, before returning to the fold in 2015, recording two more studio albums with the seminal group. The metal world was also affected by terrorism, when vocalist Andrea Haugen was killed in the Kongsberg this past October.

Behind the stage, some of our most important figures would also pass on, including Malcolm Dome, the British journalist credited with coining the term "thrash metal," who was a walking encyclopedia of metal knowledge, appearing in numerous documentaries and penning several books on some of metal and rock's greatest icons. Early on in the year, we also said goodbye to Megaforce co-founder Marsha Zazula, who was responsible for signing so many of the most revered names in thrash, as well as Mick Rock, an iconic photographer who captured some of the best shots of such names as Ozzy, Motley Crue and Thin Lizzy to name a few. More... 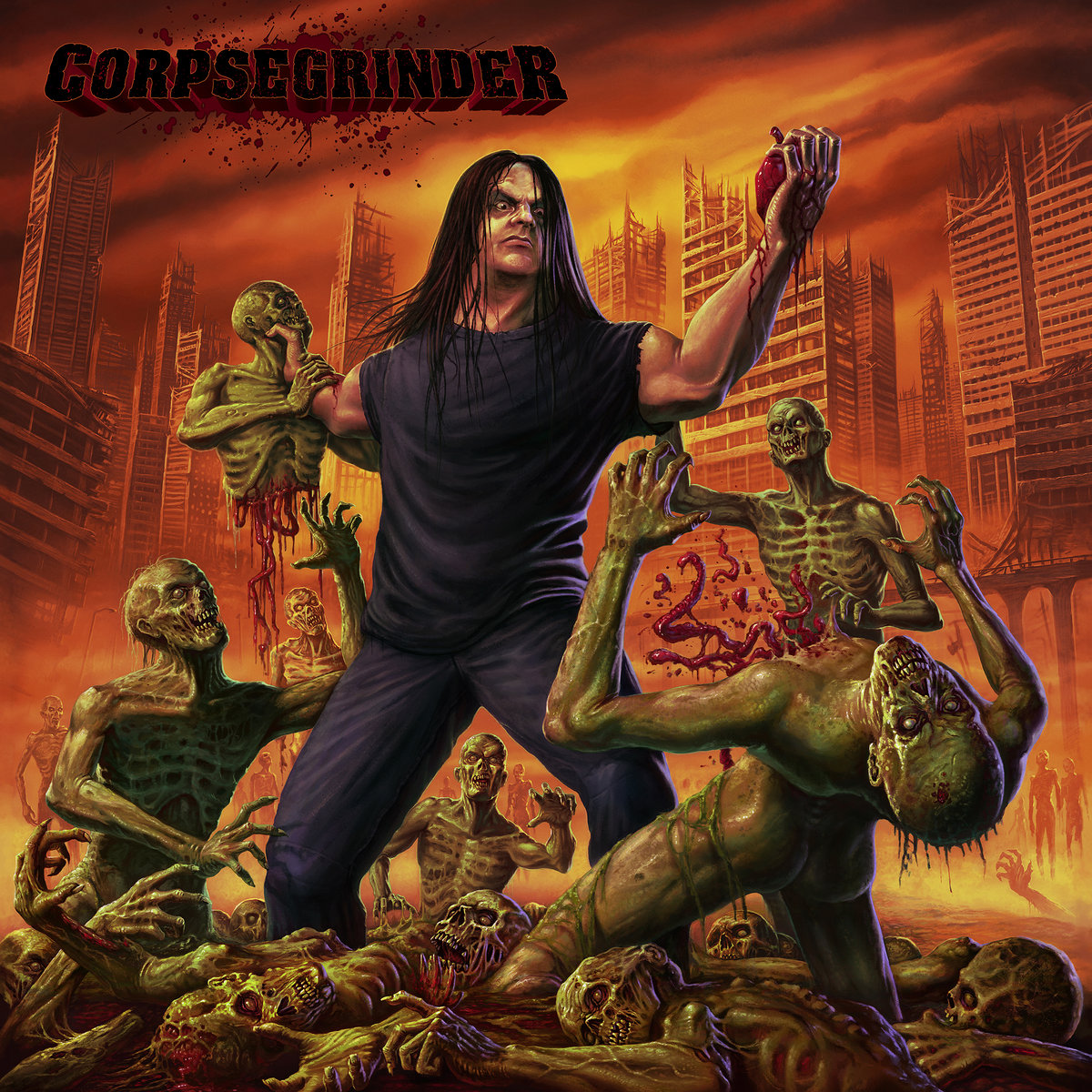 Cannibal Corpse frontman George “Corpsegrinder” Fisher premieres his second new single “On Wings Of Carnage” from his upcoming solo release. The effort was recorded with producer Jamey Jasta (Hatebreed) and Nick Bellmore (Dee Snider/Kingdom Of Sorrow) and will be out on February 25th.

A new music video for Shadow Of Intent‘s new track “Of Fury” has premiered online streaming for you below. Director Joey Durango helmed the clip, which is available to view below. The is off the band’s new album, “Elegy“, out in stores now.

Shadow Of Intent will be joining Cannibal Corpse, Whitechapel and Revocation on the below U.S. tour: More...

Shadow Of Intent premiere their new single “Of Fury” from their upcoming outing, “Elegy“. That track arrives online as the album’s January 14th release by Unique Leader Records approaches.

Shadow Of Intent will be out touring with Cannibal Corpse, Whitechapel and Revocation. You can catch that bands live on the following dates: More...

Long-running death metal icons, Cannibal Corpse, will return to stages this winter on a US headlining tour with support from labelmates Whitechapel and Revocation. A celebration of the 40th Anniversary of Metal Blade Records, the trek begins February 19 in Atlanta, Georgia and makes its way through over two dozen cities, closing on March 26 in Ft. Lauderdale, Florida. Additional support will be provided by Shadow Of Intent. Tickets go on sale Friday, October 15 at 10 AM, local time.

Cannibal Corpse bassist Alex Webster states: "We’re very excited to announce our first tour for Violence Unimagined as part of this amazing lineup with Whitechapel and Revocation. We can’t wait to get back on the road and be on stage again. See you all soon!"

Comments Whitechapel’s Alex Wade: "We are excited to get back on the road after two years of no shows and what better band to do it with than death metal legends Cannibal Corpse. We thank them for bringing us along and can’t wait to see you all out there playing songs off our new album 'Kin.'"

Revocation’s Dave Davidson adds: "It's been almost two years since our last show; needless to say we're beyond excited to hit the road with Cannibal Corpse, Whitechapel, and Shadow Of Intent this winter. This tour will be an absolute banger; get your tickets now so you’re not left out in the cold wishing you were circle pitting with all of your friends." More...

Ex-Twisted Sister singer Dee Snider premieres a new music video for his latest single “Down But Never Out”, taken from his fifth solo album “Leave A Scar”.

Tells Dee Snider about “Down But Never Out”: More...