First, a disclaimer… I don’t tend to listen to everything that comes out in order to pick my favorites. My listening, instead, focuses on bands I think I may be seeing in the coming year or bands I’ve seen in the past few years that I was impressed with.

These aren’t in any order, and a fuller list (including several non-metal albums) can be found here.

Also, check out Diamond Oz’s picks here. Our choices include one overlapping album. Of course, my personal favorites shouldn’t be considered concession picks of MetalUnderground.com. 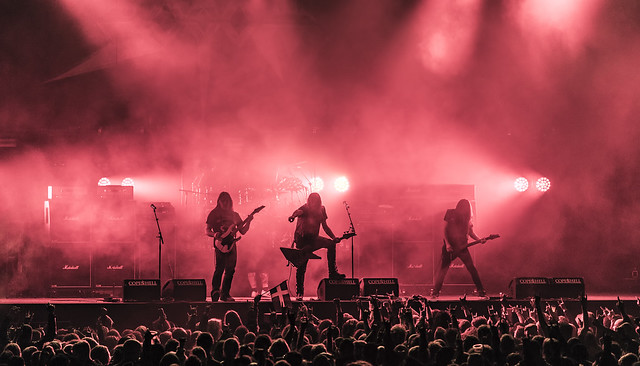 I always liked Sodom, but I didn’t listen to them much. They were supposed to play at the 2017 Gefle Metal Festival so in the six months prior I really started to get into them. Alas, they were a last minute cancel so I had to wait another year to finally see them live. That happened at 2018 Copenhell (pictured above) at about 2 a.m. I was blown away. That was a magical performance, and I’ve been a super fan ever since. Genesis XIX is their 16th album but called 19. Why? I have no idea. The album doesn’t create a new Sodom sound, and, in fact, some songs could have easily been on earlier albums. Even though there is nothing ground breaking or revolutionary here, Sodom delivers as well as they ever have and fans won’t be disappointed.

One of my favorite bands since I first heard them in the late 1990s, Moment is Dark Tranquillity’s 12th album. The only thing puzzling, to me, about Dark Tranquillity is why they aren’t more well known and respected. They always seem to be playing in the afternoon at festivals or opening for a couple other bands that should be opening for them in my opinion. Not to take anything away from bands like In Flames or Opeth, but it is odd to me that Dark Tranquillity has less than a third of the following on social media as them. Moment has only been out for a month so I have only listened to it a few times, but each listening sounds better (and the first run was fantastic on its own)—a good sign.

Blackened post-metallers Redwood Hill were one of the bands I most wanted to see at 2020 Copenhell, a festival which, of course, didn’t happen. Hopefully the 2021 version goes off without a hitch. Even the shorter songs on Ender are epic. If you’ve never heard of Redwood Hill and you enjoy black metal, post metal, or shoegaze then it’s time to experience an underground masterpiece.

Enslaved’s 15th album was in my rotation since its release a few months ago, but I hadn’t really noticed how brilliant it was until a week or two ago when I listened to it after an edible I had consumed kicked in. That listening changed everything. Let’s just say it was a The Dark Side of the Moon kind of experience that you all should take part of.

Vökudraumsins Fangi is the third of three perfect, or nearly so, albums from Iceland’s Auðn. The writing is carefully crafted, beautiful, and well executed. The atmosphere created here provides therapy for a troubled soul. Put your headphones on, turn down the lights, grab your favorite beverage, and enjoy the best 55 minutes of your day.