A Band of Orcs

Latest A Band of Orcs News

Below is our complete A Band of Orcs news coverage, including columns and articles pertaining to the band. Some articles listed may be indirectly related, such as side projects of the band members, etc.

Update: the tribute album is now available for download!

As April 14th draws near, Metalunderground.com will be paying tribute to the late Peter Steele, whose iconic vocal talents in Type O Negative helped shape the musical landscape for a generation of music lovers. The anniversary of Peter’s passing will see the release of “All For None, None For All: A Tribute to Peter Steele,” which includes twelve cover tracks graciously donated by underground bands from across the world and from various genres of metal. In memory of Peter’s own various covers, each song provides a unique interpretation on Type O Negative or Carnivore.

A second trailer has now been posted online with clips from each of the songs on the tribute, in order to give past and future Peter Steele fans a chance to get acquainted with the bands honoring his legacy. The teaser trailer can be found below. An interactive version of the album’s digital booklet, created by Dan Mitchell of Beneath the Woods studio, is also available for all to view at this location.

The anniversary of the death of an icon is a bittersweet one. While we may never get to hear what Peter had in store for us next, we can still remember him and retrace the steps he already took on his musical career. Commenting on his passing a year ago, Tennessee’s Dark Hound added “Never bowing to be what anybody else wanted him to be, Peter forged his own way and his own style and sound, something every musician should hope to accomplish. That spirit and his music will continue to inspire us and countless bands to come. R.I.P. Peter Steele, thank you for what you've left us.”

“All For None, None For All: A Tribute to Peter Steele” will be available on April 14th, 2011 in digital format with a PDF booklet for $3 (three U.S. dollars), which is solely to cover the cost of mechanical licensing and transaction fees. Any remaining money left over will be given to charity. In addition, free desktop and iPhone wallpapers based on the cover artwork will be made available for anyone to download.

The artwork can be viewed below, and the album’s track listing is as follows: 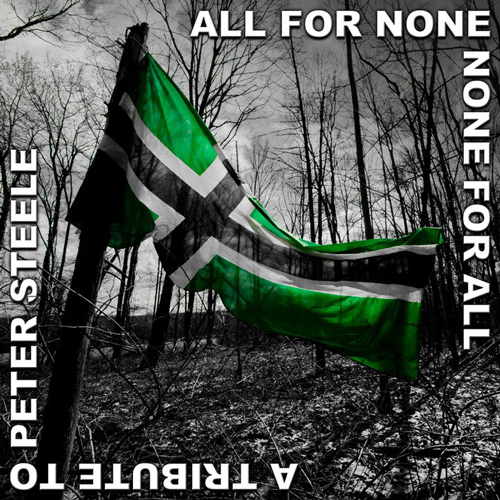 Update: the second teaser trailer, which features clips from all twelve songs on the tribute, is now available at this location.

As was previously announced, Metalunderground.com will be releasing an exclusive tribute album to Peter Steele, who passed away last April. A dozen bands from across the world came together to contribute to the album and honor the icon of doom and gloom. The cover artwork for the tribute, which follows the iconic Type O Negative style and was created by Dan Mitchell of Beneath the Woods studio, has now been revealed and can be viewed below.

To whet the fan’s appetites and give a taste of what’s to come, a teaser trailer is also now available that showcases clips from two of the cover songs appearing on “All For None, None For All: A Tribute To Peter Steele.” Check out the video below to hear segments from the gothic recreation of “Love You To Death” by Autumns Eyes and the power metal rendition of “I Don’t Wanna Be Me” by Auvernia.

Speaking on Peter’s influence in the musical world, Argentina based band Auvernia commented, “Type O Negative - and specially Peter Steele as their front man and composer - has been inspirational for us in terms of diversity in music. They were not afraid to experiment, to melt genres such as thrash and goth for the sake of the compositions, that way creating their own trademark. If we also add musicianship, personality and attitude, then you have an icon. That's the legacy we take from Peter Steele and his band, for their heritage is there, within all their music.”

The track order has now been finalized for the tribute album, which features bands from such diverse locations as Finland, Taiwan, Norway, Denmark, Spain, and even the U.S.

“All For None, None For All: A Tribute To Peter Steele” will be available in digital format through Metalunderground.com for a small fee, required to cover the mechanical licensing fees and transaction costs. Any leftover profits will be donated to charity. Stay tuned for additional details on the release of this multinational tribute to one of metal’s fallen legends.

Last year the musical world was dealt a serious blow when gothic metal titan Peter Steele tragically passed away at the age of 48. While Peter may be gone, his music and his legacy live on, and they continue to inspire musicians around the world.

To honor Peter’s memory on the anniversary of his passing, and lead a new generation of metalheads to his music, heavy metal news site Metalunderground.com has teamed up with a dozen underground bands from across the globe to release an exclusive tribute album. The tribute, entitled “All For None, None For All: A Tribute to Peter Steele," was done in collaboration with Dan Mitchell of Beneath The Woods Studio and features twelve stellar cover songs from many stages of Peter’s career in both Type O Negative and Carnivore.

The songs covered, which include interpretations running the gamut from depressive rock to power metal to death metal and many stops in-between, are as follows:

A final track listing is still being determined.

Discussing his own exposure to Type O Negative, Fairytale Abuse vocalist Simon Pederson explained, “I remember very clearly when one of my friends introduced me to Type O Negative back in the early 90´s. I was quite impressed by the ambiance and melancholia of the music but even more by the depth and character of Peter Steele´s vocals. Since then their albums still regularly find their way to my CD player.” Simon then went on to add, “Peter Steele is for us without doubt one of the most significant forefathers within the entire melodic metal genre. So when being asked to deliver a song for his tribute we were doubtless that we had to participate and are honored to do so.” More...

California costumed death metal act A Band Of Orcs has a nnounced three exclusive dates for the U.S. west coast.Furthermore, its show on Oct 29th, 2010 in Simi Valley ay 118 West Live will also be professionally filmed and recorded.

California's costumed death metallers A Band of Orcs have posted thier debut music video for the track "Into the Maelstrom" via the band's official YouTube channel. The song comes off of the band's EP "WarChiefs of the Apocalypse."

You can view the video below:

California death metallers A Band of Orcs have issued the following update about playing a live show alongside 3 Inches of Blood:

"We return to the field to battle human warriors 3 Inches of Blood, as they make another raid on the Vortex! We had a great showdown with 'em in January and look forward to clashing arms with them again. Tickets on sale at this location. This will be A Band of Orcs' last show of the year, so don't miss this epic rematch!!! Until the Domination, oRc on!!!"

The details are as follows:

California death metallers A Band of Orcs has launched a new Youtube channel. The channel features music videos from the band's debut EP "WarChiefs of the Apocalypse" as well as live performance footage.

A web commercial has been posted online for the upcoming Orctoberfest, which can be viewed below. The Orctoberfest will take place in Santa Cruz, CA on October 29th. The confirmed bands for the festival include A Band of Orcs, Skinlab, Falling to Pieces, Nekrogoblikon, Fiends at Feast, and Kha'nos. More...

A Band of Orcs has issued the following update about Skinlab being added to the upcoming Orctoberfest show:

The Orctoberfest will take place in Santa Cruz, CA on October 29th. Other bands confirmed for the festival include A Band of Orcs, Falling to Pieces, Nekrogoblikon, Fiends at Feast, and Kha'nos.

California death metallers A Band of Orcs have announced that they will be appearing at the Orctober Fest in Santa Cruz, CA on October 29th. Other bands confirmed for the festival include Falling to Pieces, Nekrogoblikon, Fiends at Feast, and Kha'nos.

A Band Of Orcs Announces Live Show With Deicide

California death metallers A Band of Orcs have issued the following statement about an upcoming show alongside Deicide:

California death metallers A Band Of Orcs have posted three new video interviews online. The video clips can be viewed below. More...

A Band Of Orcs has posted a new live video clip online, which can be viewed below. The band issued the following statement about the video:

"Greetings, Here's a brand-spankin' new song for you all, Inchoates, videographed by the indefatiguable Psychogeezer and posted on his myspace page. This one is called ‘Fall of the Fire Lord,’ and is the third song off a concept album the orcs are currently working on that pays tribute to the ‘Against the Giants’ module series written by Gary Gygax for the AD&D game. The first 2 songs A Band of Orcs has written for this album are called ‘Hall of the Frozen Dead’ and ‘When the Hills Run Red.’" More...

A Band of Orcs has announced an all ages show on June 13th at Santa Cruz Vet's Center in Santa Cruz, California. Supporting acts will include Ex Mortus, Savage Machine, Blasphemous Creation, and Fiends at Feast. A video commercial for the show can be viewed below. More...

A Band Of Orcs Endorsed By Jackson Guitars

A Band Of Orcs has issued the following update about two members becoming endorsed by Jackson Guitars:

"What do Lamb of God, Gojira, and Iron Maiden have in common with A Band of Orcs? Band members with an endorsement from Jackson Guitars! And what's more metal than a killer Jackson flying V or limited edition Kelly? Nothing.

"Artist Relations Manager Chris Cannella had this to say about A Band of Orcs: "I first put in the video only to be taken back by the high level of production and quality of the video. Just amazing. I then waited for the track to begin and in all honesty most bands use theatrics to cover up lack of talent. This is NOT the case here. I am currently listening to CD now and have to say this is pretty bad*ss stuff. I would love to work with you."

"Thank you Chris and Jackson Guitars. Cretos and Hulg will remain brutal representatives of the best guitars in metal."

A Band Of Orcs Playing With 3 Inches Of Blood

Dungeons and Dragons influenced metal band A Band of Orcs has issued the following update about playing with 3 Inches of Blood on January 14th:

Hell, yes! A Band of Orcs finally get a showdown with the brave, some would say foolish, men who wrote the song "Destroy the oRcs!" Do not miss this most awesome of duels!!!!!Until the Domination, oRc on!!!

The show's promotional poster can be viewed below. More...

Buy A Band of Orcs Tickets

No A Band of Orcs links to display (yet).